FINE ART from TRADITIONAL to WHIMSICAL to ABSTRACT. Greet these prolific artists in this three-woman show. Their beautiful works will be on display from July 16 to August 26. Don’t Miss It! 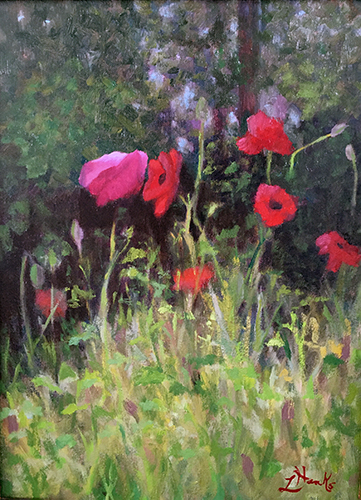 Linda Hanks, Signature Member of The American Artists Professional League • Linda relates her beginnings: I love what I do and I hope to evoke a mood or feeling from the viewer, even though it might be different from my mine. Painting, for me, is like talking on canvas because it’s a non-verbal communication. I have always, always, always loved the color red. In high school, everything I had was the color red…even my 1949 Dodge coup. I grew up in a small Southern town where I watched the art of painting at my mother’s knee. I watched her paint a large oak tree in winter and was in awe in her ability to make it look real. As I grew, music became an important part of my life with piano, clarinet, and saxophone being the avenue of concerts, jazz bands, and orchestras. I became interested in science and math in high school and decided that if I wanted to feed myself regularly, I should pursue one of those interests. I went to college, majored in microbiology, married, and worked in microbiology until my daughters were born. I raised my children, divorced, and in the process, discovered painting. For me, painting is a very spiritual endeavor and I approach each piece with an eagerness to translate thoughts and feelings on canvas. Each time I go into my studio, it’s like going into a microbiology laboratory. I experiment with different approaches in starting a painting; color combinations, paint applications brush sizes, and brush types… depending on the subject. I moved to New York City in 2000 to study at The Art Students’ League with Michael Burban and others. I have also studied the figure with Nelson Shanks in his intensive workshops both in West Palm Beach and in his school in Philadelphia, PA. 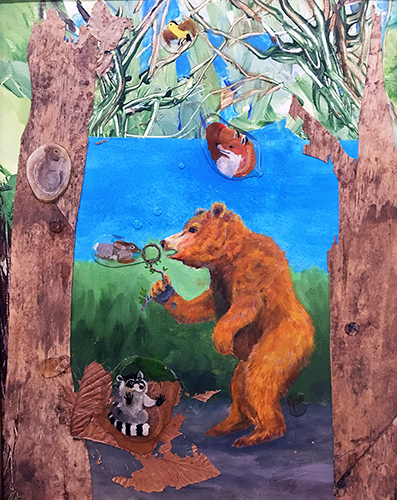 Mozelle “Moses” Atwood Funderburk • Mozelle began illustrating wildlife around age 6 by copying works of artists such as Louis Agassiz Fuertes. She was encouraged by her family including her veterinarian father and biology teacher mother. Her experiences growing up in the South gave her a great appreciation for flora and fauna of the woodlands, fields and swamps of south Georgia and north Florida. She was graduated with an AA degree in art from Chipola Junior College and a BA degree in art from the University of Georgia. During her college years she worked as a wildlife illustrator for the Southeastern Cooperative Wildlife Disease Study at UGA Veterinary School and did illustrations for professors in both the Agriculture and Forestry departments. Mozelle began working in 1967 at Fernbank Science Center.  She remained there for 31 years and established Funderburk Studios in 1976.   The position at FSC involved design and production of natural science exhibits with a full range of fabrication techniques for diorama components.  Also included in her job was illustrating educational publications, brochures and Planetarium programs as well as graphics and exhibit murals. She was in charge of model-making and groundwork for dioramas at the Fernbank Museum of Natural History which opened in Atlanta, Ga. in 1992. Through illustrations for planetarium astronomy programs the artist furthered an interest in mythology and ancient civilizations.  Those interests allowed her to meld natural science knowledge with fantasy to work in different genres of art.  She is a lifetime member of the Association of Science Fiction and Fantasy Artists.  Mozelle’s membership in the National League of American Pen Women since 2005 has been an important part of her creative process and progress. 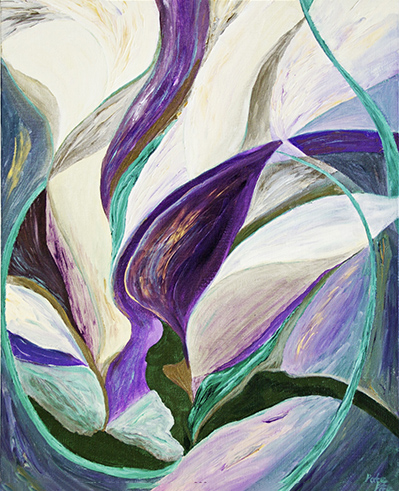 Kathy Pate • Kathy began painting in her early 20s, starting with representational art then quickly moving into more abstract art. A turning point was when a friend told Kathy that she was painting what her friend had been seeing her entire life, but had never seen anyone paint it. She wasn’t even sure what to call it, but Kathy began to realize that she was painting sound, and the essence of stories and conversations. This transference of one sense into a separate sense (e.g. music or sound translating into color and form) is called synesthesia. Currently serving as Director of the Dawson Chorale, Kathy is a member of the National Association for the Teachers of Singing (NATS), as well as the National League of American Pen Women (NLAPW.org) in both art and music. She served as the National Music Chair (2018-2022) and Music Editor (2018-2021), and has served as both the Music Chair and Art Chair for the Atlanta Branch of NLAPW. She has three daughters, five grandchildren, and lives happily with her husband in Dawsonville, Georgia on land she calls “a little piece of heaven.” She continues to teach voice and piano, and loves to paint in her spare time. Born into a musical family, Kathy Pate began playing piano by ear at age three, and began classical training at five. Kathy has been a teacher of piano and voice since 1994 to well over 300 students, many from ages 5 through 18. A number of her students majored and distinguished themselves in voice, composition, musical theatre and drama at Yale, Harvard, NYU, UCLA, USC, Stanford, Loyola Marymount, Belmont University, Berklee College of Music, University of Cincinnati Conservatory of Music, New England Conservatory, and Brooklyn Conservatory.